This problem occurred to me after seeing the diagram below in Glencoe Geometry (2018) p. 644. It's different from a problem discussed on Numberphile two weeks ago (https://www.youtube.com/watch?v=bRIL9kMJJSc&t=255s) since, in the video's terminology, we allow the circles to kiss.

To get started I borrowed a method that worked well for the "how many ways can 3 sticks touch" problem and considered numbers of intersections. With 0 intersections we have a version of the problem of how many ways 3 bags can be stuffed that @samjshah wrote about (https://samjshah.com/2015/04/03/stuffing-sacks/).

If there is just one intersection it must come from two circles kissing. There are two ways the circles can kiss. Each row below shows the possible placements for the third circle for one of the types of kissing.

2 intersections could come from a crossing or from two kisses. The last entry where all three circles cross through the same two intersections was the hardest for me to think of. 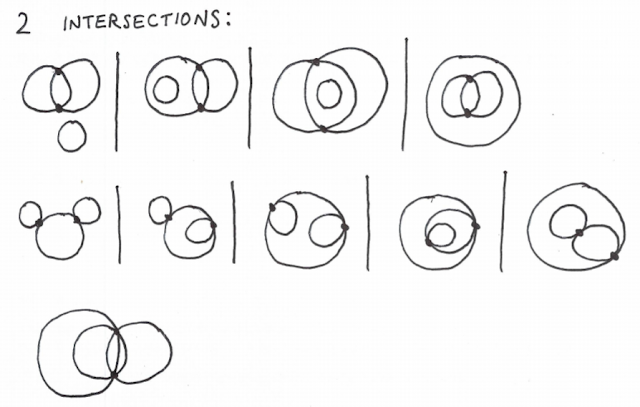 3 intersections could result from a crossing and a kiss, two crossings that share an intersection, or three kisses: 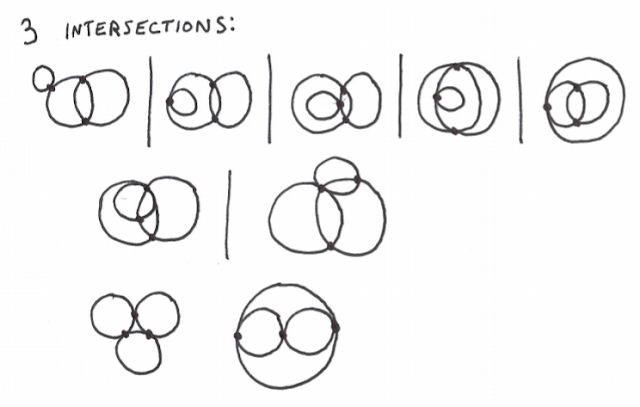 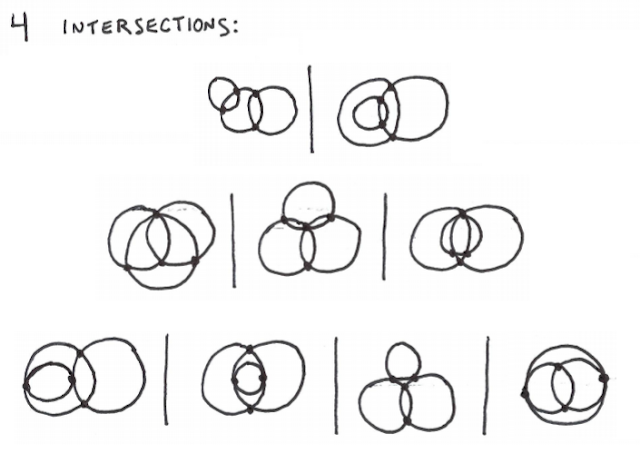 5 intersections can be made by two crosses and a kiss:

Finally, 6 intersections form when all three circles cross and none of the intersections overlap. I don't think I would have found the one in the top right position but saw it in the Numberphile video. 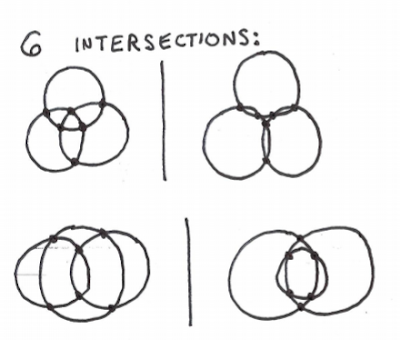 No more than six intersections are possible with three circles. In total that makes 4 + 9 + 10 + 9 + 9 + 3 + 4 = 48 possibilities. I hope I missed some - if I did please let me know! Check out the fascinating discussion started by @autismplusmath at <https://www.cake.co/conversations/lQlZDGj/how-many-ways-can-3-circles-intersect-how-many-ways-can-n-circles-intersect>, especially Factotum's numbering system. I'm sure a few of the above possibilities came from Factotum's enumeration.
at April 30, 2019 No comments: