The day before school started I was driving around to office supply stores buying up their quad ruled composition books. Over the summer I had wondered how to structure Precalculus to better connect its topics with greater coherence and started working on some problems from Phillips Exeter Academy <https://www.exeter.edu/mathproblems>. I realized that I wanted my students to do lots of work on coordinate grids and that maybe having all their work connected in a book instead of scattered on different sheets would help them see the connectedness of the subject itself. After the first week I am very glad we started using the notebooks!

After discussing "perseverance" (from Mathematical Practice #1) and distributing the notebooks I told everyone to skip the first page (where we would put our Skills List) and draw a 4x4 set of dots where we would start working on the first problem of Dan Finkel's A Mathematician at Play (AMAP) #1 <https://mathforlove.com/2018/01/mathematician-at-play-puzzle-1/>. It is easy to demonstrate perseverance at this problem - keep drawing more polygons! Every hour a student solved the puzzle and every hour a student argued that 16 is the maximum number of sides due to the number of dots (Mathematical Practice #3). I asked students how we could extend the problem and they said we could try a 5x5 set of dots. I regret rushing on to a new problem in third hour. During the other hours I let the problem take up the whole time and many students were engaged up to the last minute, though no one was able to draw a 25-sided polygon!

We began with #14 from Martin Gardner's My Best Mathematical and Logic Puzzles: arrange 12 matches to form a polygon with area 4. It's another good opportunity for students to exercise creativity and one solution provides an opportunity to review area of triangles and the 3-4-5 right triangle. 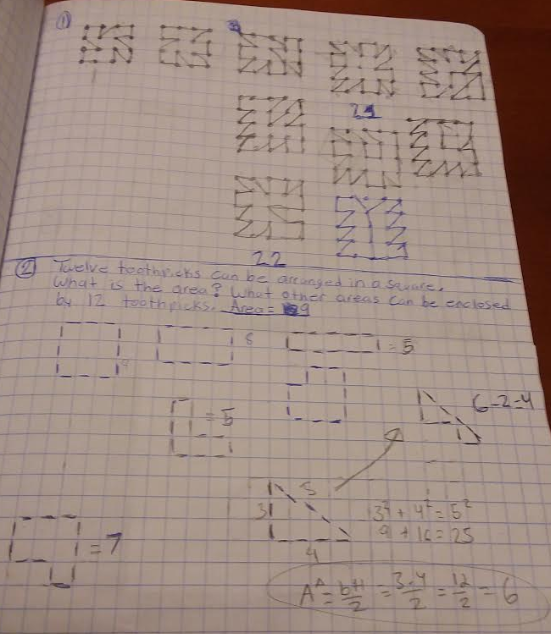 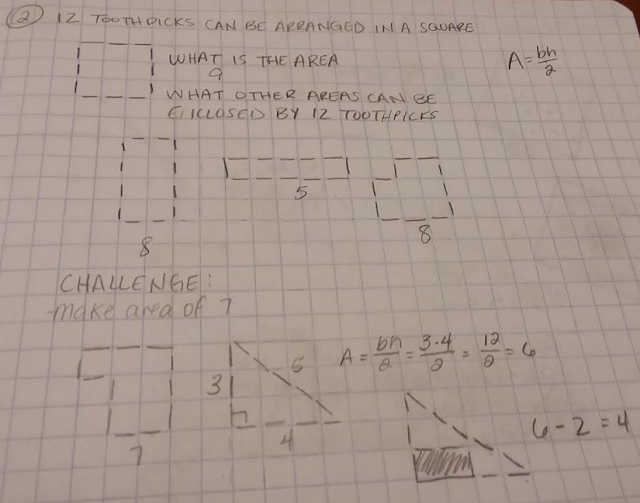 After having students start setting up the Skills List in the front of their notebook, we started working on the second problem of Finkel's AMAP #2 <https://mathforlove.com/2018/01/a-mathematician-at-play-puzzle-2/>. Really we only worked on the first part of the problem: finding areas of "grid squares." Simply drawing the squares primes the mind to think about perpendicularity! Many students immediately saw the area of the first square. Different classes proposed different methods for finding the areas of the other squares. Some classes added triangles around the outside of the square to make a larger square. Other classes dissected the square into four triangles and a smaller square. 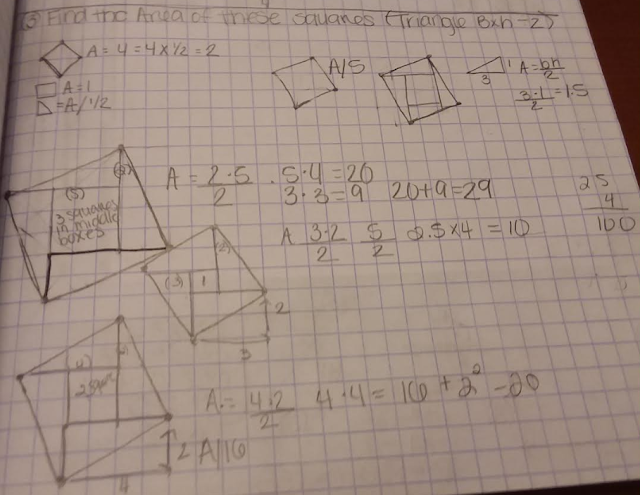 We started the hour with one more example of finding the area of a grid square, then used whatever method we had adopted to prove the Pythagorean Theorem. 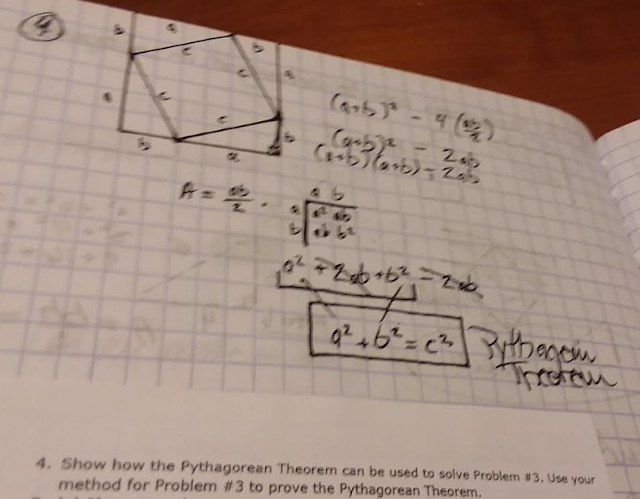 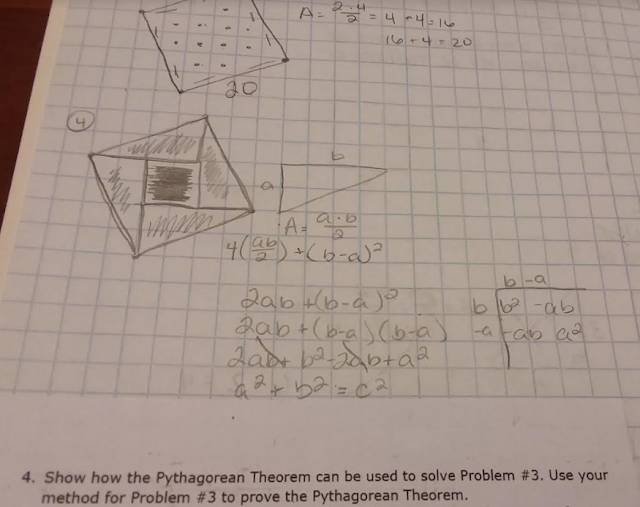 After we used the Pythagorean Theorem to find some distances traveled and some distances between pairs of points in the xy-plane, students worked on two problems from Exeter Math (2.5, 2.13) and a similar problem I made up based on 2.23. 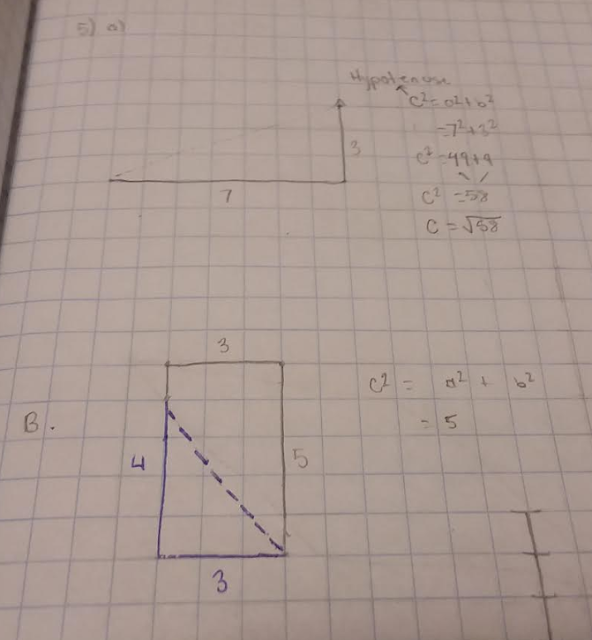 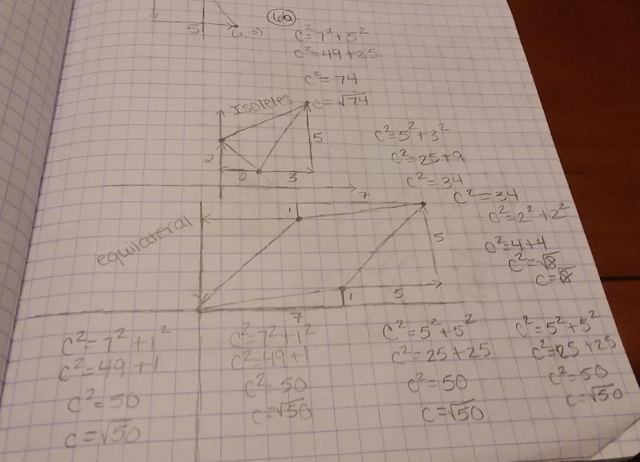 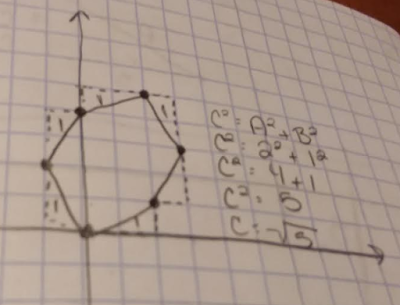 Here is the list of problems that students pasted in their notebooks:

#10 created good class discussion. Students described triangle ABC as being moved 6 to the right and 2 up to produce triangle TUV, which we were able to formalize using a vector in component form. Many students immediately used this notation to describe the directed line segments in #11. 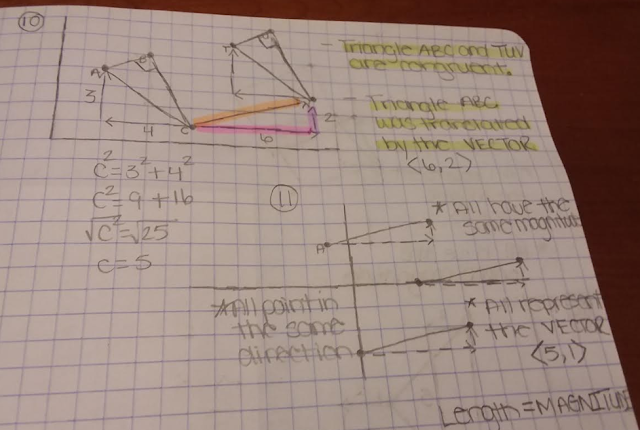 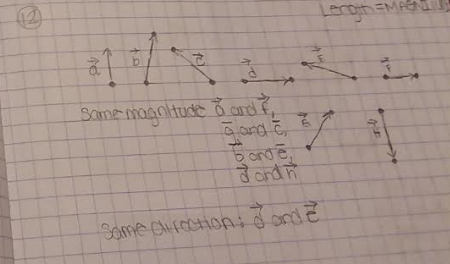 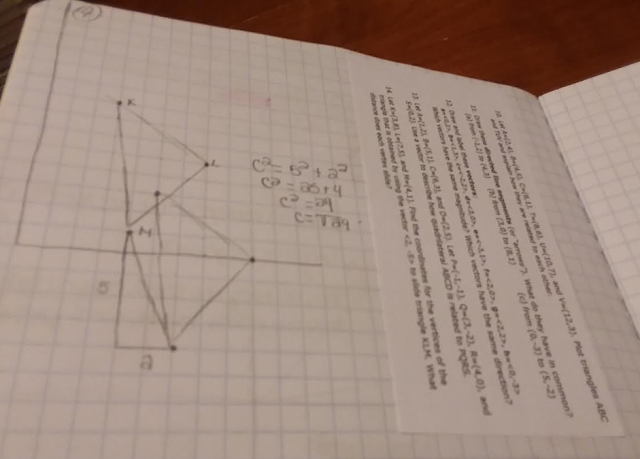 What I like about these selected Exeter problems is that they have both a rote procedural component (plot these points) and a conceptual component (what type of figure is this? / what do these figures have in common?). I believe Dan Meyer wrote somewhere (probably while expounding his headache-aspirin philosophy) that while carrying out a simple mechanical process, resources in the brain are freed up to think about that process.
at September 23, 2018 3 comments: