I used to introduce sets of numbers by asking students to name some numbers that I then write on the board. At first students name small positive integers, but with encouragement to be more adventurous they name negatives and fractions and maybe even pi or infinity! Then I would draw circles around the numbers and (because all the numbers were placed carefully) we'd get something like the usual image of sets of numbers: 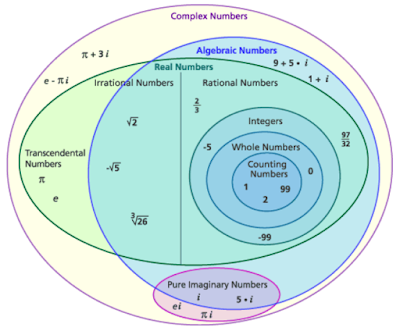 I now find this sort of image problematic, because it makes ours sets of numbers look like biological taxonomy. Look at how the numbers sit in their places isolated, as if they were individual organisms out there waiting to be sorted into groups. In Science and the Modern World, Alfred North Whitehead contrasts biological classification with mathematical measurement:

The practical counsel to be derived from Pythagoras, is to measure, and thus to express quality in terms of numerically determined quantity. But the biological sciences, then and till our own time, have been overwhelmingly classificatory. Accordingly, Aristotle by his Logic throws the emphasis on classification. The popularity of Aristotelian Logic retarded the advance of physical science throughout the Middle Ages. ... Classification is a halfway house between the immediate concreteness of the individual thing and the complete abstraction of mathematical notions. ... Classification is necessary. But unless you can progress from classification to mathematics, your reasoning will not take you very far. (p. 28)

We need an image that shows that we are doing more than classifying in the biological sense. Our sets of numbers are profanely presented above as blobs, mere collections of elements. But numbers are not individuals. They are positions in structures. Whereas we can first familiarize ourselves with the properties of an individual organism and later determine its relationship to other organisms, the only properties a number has are its relationships to other numbers. As Willard Van Orman Quine writes in Ontological Relativity, "numbers ... are known only by their laws." That's why I propose a sort of image like this one, that shows some of the structure of our sets of numbers, both some structure within each set of numbers and also some structural relationships between the sets of numbers: 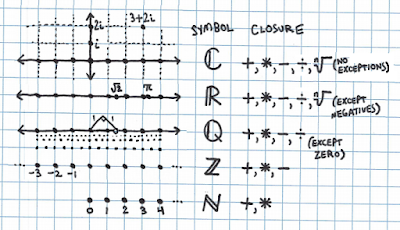 Note that in the first image the number zero occurs exactly once, whereas in the second image there is a separate zero in each set of numbers. This aspect might please Bertrand Russell, who wrote in his Introduction to Mathematical Philosophy that

One of the mistakes that have delayed the discovery of correct definitions in this region is the common idea that each extension of number included the previous sorts as special cases. It was thought that, in dealing with positive and negative integers, the positive integers might be identified with the original signless integers. Again it was thought that a fraction whose denominator is 1 may be identified with the natural number which is its numerator. ... All these suppositions were erroneous, and must be discarded, as we shall find, if correct definitions are to be given. (p. 63-64)

We could insist that the natural numbers are not a subset of the integers, but instead that the natural numbers are only isomorphic to a subset of the integers. In any case, I hope we will start using images that display some of the structure of our sets of numbers and maybe even suggest the possibility of further sets of numbers. Where are the quaternions and further extensions of the complex numbers? 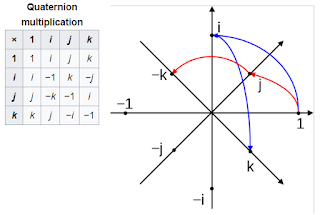 What about the surreal numbers, which deepen the sort of "completeness" the real numbers bring? 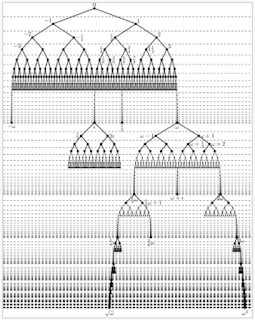 If you have a good image of our number sets or can improve upon my attempt, please share!
at June 30, 2018